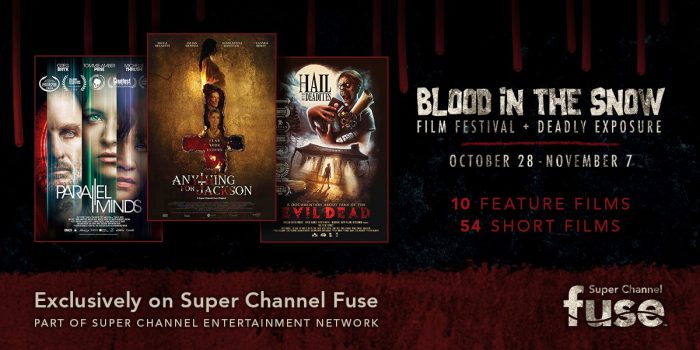 It’s October and that means it’s the spookiest time of year! Sharpen your pumpkin-carving knives, stock up on candy and turn on your VMedia TV.

Super Channel is bringing a virtual festival of horror films to fans across Canada with the Blood In The Snow film festival premiering exclusively on Super Channel FUSE, October 28th to November 7, 2020.

This virtual festival on Super Channel FUSE features a terrific selection of Canadian horror features and shorts just in time for Halloween. Dedicated to promoting the best in independent Canadian horror cinema, BITS is the horror film festival available in Canada.  For the first time, horror fans across the country will be able to immerse themselves in all the thrills and chills that BITS has to offer.

Here’s the Blood In The Snow Schedule that will keep you on the edge of your seat this Halloween season!

Darkest, creepiest and weirdest films at Blood in the Snow.

Horror comedy shorts and generally things on the lighter side of death!

It’s time to celebrate the 2020 Blood in the Snow Film Festival better known as “The Bloodies”. Winners will be announced during the awards!