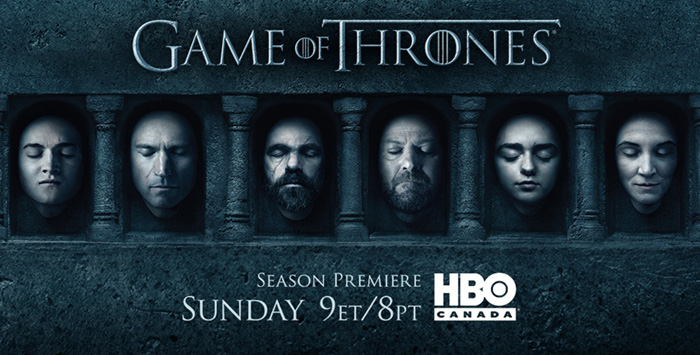 April 18, 2016. It may be beautiful outside but winter is coming back with a vengeance:
Game of Thrones Season 6 is kicking off this Sunday, April 24 at 9pm ET!

Will Tyrion tame some dragons – not to mention Meereen’s teeming streets? What is the fate of Sansa Stark and Theon “backstabber” Greyjoy? And of course, will we be seeing some Snow this season?

And that’s just the tip of the Dornish spear for this season. Brandon Stark continues with his quest to solve the riddles of the three-eyed crow and other mysteries in the cold, desolate landscape Beyond-the-Wall.

Season 5 also left off with the zealots, known as the Sparrows, seemingly in control of King’s Landing – a total buzzkill for the Seven Kingdoms’ favourite profession. More importantly, what is Margaery’s fate? And how soon before Dorne and the Lannisters start to duke it out?

All the characters you love, and all the ones you love to hate (cough, Cersei, cough cough), will be back on at 9 pm this coming Sunday, so be sure to check in.

Haven’t jumped on the Game of Thrones phenomenon yet on TMN/HBO?  Well now is the time to discover Game of Thrones on us! For a limited time, for VMedia TV customers who aren’t currently subscribers to TMN/HBO Canada, you can watch the complete Season 1 of Game of Thrones on VMedia SVOD for FREE. Starting April 18 to May 15, all ten episodes of Season 1 will be loaded on our SVOD platform for you to watch any time you like. Binge it, or savour each episode at your own pace, and find out why viewers and critics are obsessed with Game of Thrones.

Remember. In Game of Thrones, you win or you die. Watching it is almost as dramatic, so get pumped for Season 6 with VMedia!