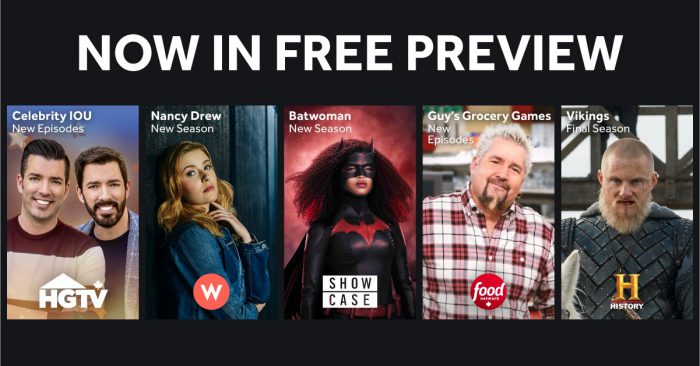 W Network, Food Network, HGTV Canada, Showcase & HISTORY are all available now on FREE PREVIEW, for your viewing pleasure and running until January 31, 2021.

Get the full details below:

If you thought, you had to wait an entire year for more cozy winter romances from Hallmark, think again. The network will follow up its annual Countdown to Christmas with its next snowy event: Winterfest 2020. For the third year in a row, Hallmark will deliver five brand-new heartwarming movies to ring in 2020.

Check out these returning top hits.

Nancy Drew
An international thriller that follows Massimo Ruggero, the charismatic yet ruthless Head of Trading at NYL, one of the world’s most important investment banks, and his mentor, NYL’s CEO, Dominic Morgan. After Dominic appoints another colleague over Massimo following a bitter promotion battle, Massimo finds himself named prime suspect in a murder investigation.

Charmed
A modern re-imagining of the original series centers on three sisters who discover they are “The Charmed Ones,” the most powerful trio of witches who protect innocents and vanquish supernatural demons.

Five Bedrooms  – Premiering in January
An international thriller that follows Massimo Ruggero, the charismatic yet ruthless Head of Trading at NYL, one of the world’s most important investment banks, and his mentor, NYL’s CEO, Dominic Morgan. After Dominic appoints another colleague over

Here are some fan-favorites and hit series you will not want to miss.

Kids Baking Championship
Mondays, 9 PM
Hosts and Judges Duff Goldman and Valerie Bertinelli are putting child prodigy bakers through challenges to find the most impressive and talented one of the baking bunch. Each young contestant will be tested on their baking skills and originality.

Big Food Bucket List
Mondays, 9 PM
Host, John Catucci, takes viewers on an adventure across North America to experience buzz-worthy, delicious food off his bucket list. John visits the restaurants behind these must-eat meals and hits the kitchen to learn how the chefs make their mind-blowing creations.

Host Guy Fieri takes a cross-country road trip to visit some of America’s classic “greasy spoon” restaurants – diners, drive-ins and dives – that have been doing it right for decades

Chopped is a cooking competition show that is all about skill, speed and ingenuity. Each week, four chefs compete before a panel of expert judges and turn baskets of mystery ingredients into an extraordinary three-course meal.

Guy Fieri sends four talented chefs running through the aisles in a high-stakes, high-skills, grocery store cooking competition. The chefs are hit by real-world challenges like finding workarounds when all the essential ingredients are suddenly “out-of-stock”.

Here’s a list of some returning favourite shows, new episodes and a hot new series to enjoy on HGTV – live and on demand!

For home restoration expert Tamara Day, there’s no such thing as a home that’s too big! She specializes in restoring the neglected large homes that others are too scared to take on bringing these beauties back to life.

Flipping team Tarek and Christina have viewers on the edge of their seats as they purchase dilapidated properties for cash, sometimes sight unseen, and then renovate and flip them resale.

Drew and Johnathan Scott are on a mission to turn families’ ordinary houses into a lifelong dream homes. The brothers help families whose current property needs a complete makeover in order to make it their forever home.

Ty Breaker is an eight-episode series that will follow Pennington as he helps desperate families decide whether to overhaul their current property or renovate a new one to better meet their needs.

Some of our favourites to watch on Showcase – both live and on demand are listed below.

Three years after billionaire philanthropist Bruce Wayne and his vigilante alter-ego, Batman disappeared, his cousin Kate Kane sets out to overcome her demons and become a symbol of hope by protecting the streets of Gotham City as Batwoman.

Bishop and Pike are back with a bang in a tense, action-packed undercover case. The lines between good and evil, friend or foe, blur in a heart stopping game of cat and mouse with an elusive crime family with connections that spread far beyond the U.K.

Starring Canadian Stana Katic, Season 3 of the haunting drama sees Emily on a dangerous journey far from Boston, testing her like never before.

Here’s our picks for top shows to check out.

This is the highly anticipated final season! The end of the saga will see tumultuous conflict between the Rus and Vikings come to a conclusion with grave consequences. While in Iceland, Ubbe is determined to fulfil his father’s dream and sail further west than any Viking has ever travelled before.

The Curse of Oak Island

Brothers Rick and Marty Lagina pursue their lifelong dream of solving the 223-year Oak Island mystery. For over two centuries, teams of researchers have attempted to crack the code that will unearth the treasure believed to be buried on the small island off the coast of Nova Scotia.

Starring William Shatner, The Unexplained is an exploration of the world’s most fascinating, strange and inexplicable mysteries; Compelling contributions from scientists, historians, and witnesses as they seek to shed light on how the impossible can happen.

Swords may not be the weapon of choice for many people nowadays, but that doesn’t stop some from continuing to work as bladesmiths. ‘Forged in Fire” tests some of the best in the field as they attempt to recreate some of history’s most iconic edged weapons.