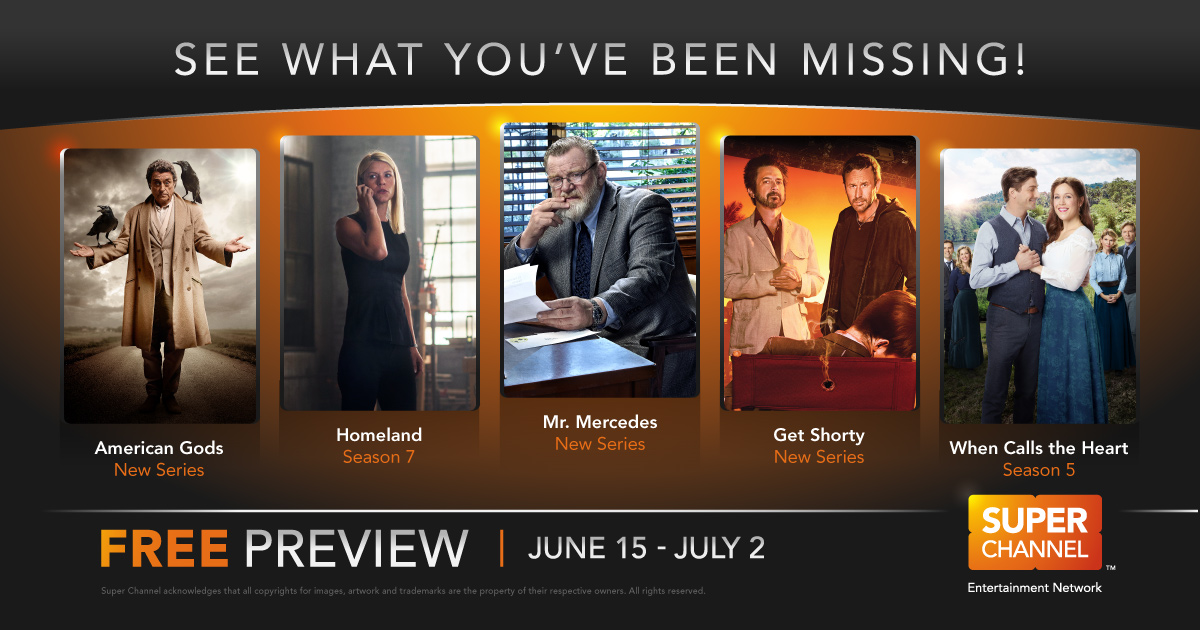 VMediaTV is excited to announce the all-new Super Channel is available in freeview until July 2, 2018! That’s right, for a limited time, your VMedia TV subscription gives you free, unlimited access to ALL of Super Channel’s programming – that’s over 1300+ hours of on demand video, 40+ TV series, and hundreds of movies.  A world of entertainment, just a click away.

Enjoy a dynamic fusion of premium programming including exclusive series, movies, documentaries, sports, stand-up comedy, and concerts. Some highlights for the month of June:

Feel good entertainment featuring heartwarming series and movie, for everyone in your home. Some highlights for the month of June:

Cedar Cove  (Season 3 premieres Sunday, June 3 @ 7:30 PM EST)
A municipal court judge does her best to balance her career with family and finding love – all while doing her best to care for the lakeside township she calls home.

When Calls The Heart (every Saturday in June)
A cultured teacher in 1910 leaves her city life to accept a job in a frontier town, where she finds purpose and love with a Mountie.

Autumn Stables (Sunday, June 9 @ 9 PM EST)
After her husband’s death, Autumn sells her ranch to handsome carpenter, Jake expecting nothing will change. However, Jake has ulterior motives with the land and her heart.

Enjoy a handpicked collection of fan favourites, and critically acclaimed movies. Highlights this month include:

The definitive source for Canadian esports enthusiasts, featuring live tournaments, news, and gaming lifestyle programming around the world. Highlights include:

The First Hour
Knowledgeable and entertaining hosts play the first 60 minutes of a new game or a recent classic for the first time.

Like what you see? Add our Super Channel theme pack for only $9.95 per month (and get your first month free!), or The Super Premium theme pack with TMN/HBO for only $27.95 per month, and don’t miss any of the action.