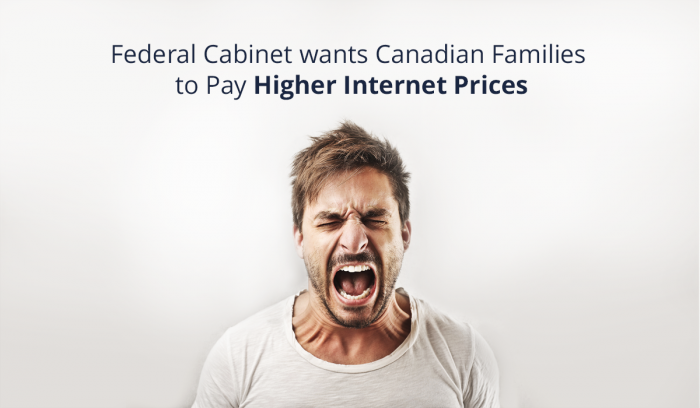 In the midst of COVID pandemic, when internet is most crucial to everyday lives of Canadians, Minister Bains intervenes in ongoing CRTC process, reversing longstanding   policy of seeking fair internet pricing for Canadians, to boost Telco profits

Toronto, ON-August 25, 2020 –VMedia Inc., one of Canada’s leading independent telecom and broadcasting service providers, today expressed its shock and dismay at the unprecedented reversal by the Federal Cabinet of a longstanding policy in favour of more competition to ensure fair and reasonable prices in home internet services for Canadians.

On August 15, 2020, Cabinet issued an order that included its expectations that the CRTC amend the terms of a decision it issued in August, 2019, which found that the rates charged by the incumbent major telecom and cable companies (such as Bell Canada, Rogers and Videotron) for internet services for at least the past four years were not ”just and reasonable”. These inflated rates have resulted in unjustifiably higher prices paid by all Canadians for internet services, already among the very highest in the industrialized world.

The amendments would have the effect of reducing competition in the delivery of internet services, making Canadians pay more for home internet than they already do, while increasing the profits of the incumbents.

Higher internet prices would impose a further burden on Canadians at anytime, but coming in the midst of the COVID pandemic, when home internet services are particularly crucial and unemployment is at record levels, it is particularly heartless.

“We invite the Prime Minister to step up to the podium at his next briefing,” said George Burger, co-founder and Director of VMedia, ”and explain to Canadians in the throes of this pandemic, when their economic circumstances are most vulnerable, and when internet service is so vital to their lives and livelihoods, that they are not, finally, entitled to just and reasonable internet prices because the incumbents are not making enough money.”

In effect, Cabinet is seeking to substitute its own findings, based on extensive and secret lobbying campaigns by the incumbents, for that of the CRTC- which, in contrast, concluded that prices are not just and reasonable and adjusted them accordingly, after conducting a six-year long completely transparent process, including hearings and analysis involving the world’s leading experts on internet costs.

The incumbents apparently succeeded in convincing Cabinet, which they could not do with the CRTC, that the CRTC decision would make them unable to invest in rural internet service improvements. This threat is a staple in all rate-setting hearings, and despite decisions unfavourable to the incumbents in the past, their investments have never been impaired. In fact, in its intervention opposing the incumbents’ petition to Cabinet, VMedia pointed out to Cabinet that the cost to the incumbents resulting from the CRTC decision was a rounding error- less than one-half of one percent of their profits over the last six years.

Moreover, because the CRTC’s decision is concurrently under appeal before the Federal Court of Appeal (FCA), as well as the CRTC itself, which, at the request of the incumbents, is in the process of reviewing its own decision, Cabinet’s order is an unprecedented intervention in an ongoing proceeding being carried out by an independent administrative tribunal, and threatens to influence the judicial appeal currently before the FCA.

“This development was completely unexpected,” said Alexei Tchernobrivets, CEO of VMedia, ”and it appears deliberately intended to influence the two ongoing appeals of the CRTC decision. Instead of rejecting the decision itself, which it had the power to do, and face the disappointment of Canadian families, Cabinet has now placed the burden on the CRTC to make Canadians pay even higher prices for internet service, especially in these difficult times, and enrich the incumbents. The CRTC deserves to be applauded for its decision, not second-guessed.”

The full text of Cabinet’s decision (https://www.canada.ca/en/innovation-science-economic-development/news/2020/08/order-in-council-responding-to-petitions-to-the-governor-in-council-concerning-telecom-order-crtc-2019-288.html) contained elements so supportive of the incumbents that lawyers for the incumbents immediately raced to the FCA with a request that the Court reopen the record and take the contents of the order and the Minister’s statement into consideration in its deliberations.

For more information and to stay current on VMedia news, follow:

VMedia is Canada’s leading independent telecom and broadcasting company available coast-to-coast, offering unlimited Internet, TV, Home Phone and Home Security services. VMedia’s mission is to provide the most affordable prices, the best choice and flexibility, dedicated consumer advocacy and ongoing service innovation. VMedia is recognized as an innovation leader in the industry, as the first to launch numerous consumer-friendly service and packaging features, and in particular is a pioneer in the development of live TV streaming solutions and IPTV broadcast technology, offering affordable choice and easy access to all your favourite TV entertainment. Visit www.vmedia.ca.