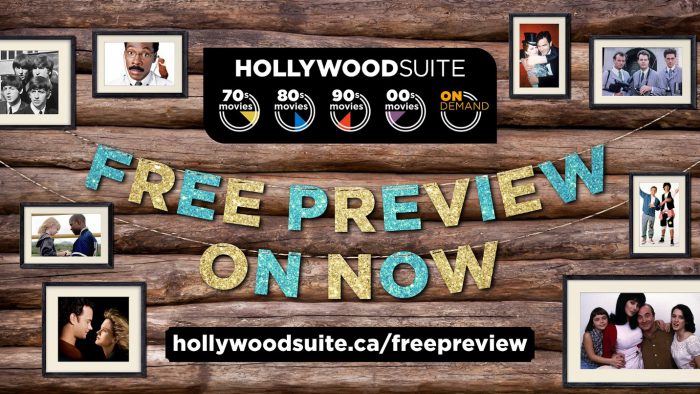 Hollywood Suite is now on FREE PREVIEW, for your TV viewing pleasure and running until January 5th. Stay close the couch this holiday season with their collection of festive flicks, family-friendly faves and even all-new series – all on VMedia TV.

Hollywood Suite features all the movies you love from the 70s, 80s, 90s and 2000s, plus essential classics, uncut and commercial-free, on four channels live and On Demand as well. There’s always something to watch on Hollywood Suite.

Here are just a few of the movies and series you don’t want to miss!

A cynical rock star receives a letter from a young fan, inviting him to spend the festive season with the youngster and his family and asking if he will perform at the local Christmas concert.

A miserable conman and his partner pose as Santa and his Little Helper to rob department stores on Christmas Eve.

October 6, 1973. Arab states led by Egypt and Syria launched a surprise invasion and nearly overran Israel during the holiest day of the Jewish calendar. The story is told through the eyes of three characters, whose lives were thrown into the heart of battle.

A Year in Film

The Hollywood Suite original documentary series A Year in Film explores how movies reflect the event, mood, politics, and culture of their time.

Highlights From Each Decade

Winner of ten Academy Awards including Best Picture, this electrifying musical sets the ageless tragedy of Romeo and Juliet in the slums of 1050s New York.

New York City Detective John McClane becomes the only hope for a small group of hostages, one of whom is his estranged wife, trapped in a Los Angeles high-rise office building when it is seized by terrorists on Christmas Eve.

When two kids find and play a magical board game, they release a man trapped for decades in it and a host of dangers that can only be stopped by finishing the game.

In a twist of the fairy tale, the Huntsman ordered to take Snow White into the woods to be killed winds up becoming her protector and mentor in a quest to vanquish the Evil Queen.